Solar power systems can be divided into two major categories, one is an independent system, and the other is a system contact system (or referred to as an AC grid connection system). The independent system is the most basic form of solar power system, also known as the prototype system of solar power. This type of system is mostly used for offshore lighthouses, buoys, and wireless relay stations at the top of the mountain (unmanned control) as a power supply. The DC power output by the solar array is directly supplied to the load. If the load is AC, DC power must also be converted to AC power through the inverter. In addition, the output DC energy is also used to charge the battery. Since the voltage of the load often fluctuates, the controller should also be set to regulate the voltage. From the power system's terminology, it is called "reverse trend" operation or colloquially called "selling electricity". Conversely, the normal operation of a power company is to supply power to users, which is called "positive current." The advantage of the system-connected solar power generation system is that when the rainy weather or the solar power generation at night is insufficient, the system can be used to directly purchase electricity from the mains electricity grid. Another important advantage of the system contact system is that the battery can be eliminated, the cost can be reduced, and the stability and reliability of the power supply can be enhanced.

By using the heat energy generated by solar radiation to generate electricity, solar thermal collectors generally convert the absorbed thermal energy into working fluid vapor, and then drive the turbine to generate electricity. The former process is the light-heat conversion process; the latter process is the thermal-electric conversion process, just like ordinary thermal power generation.

The use of solar energy is mainly the use of solar radiation reaching the ground. Solar radiation can be divided into two types. One is the light radiation emitted from the surface of the photosphere because it propagates light and heat in the form of electromagnetic waves, so it is also called electromagnetic wave radiation, which consists of visible light and invisible light. The other is particle radiation, which is a stream of positively charged protons and roughly equal amounts of negatively charged electrons and other particles. The particle radiation is usually weak and the energy is unstable, during the solar activity period. The strongest is that it has a certain influence on the upper atmosphere of human beings and the earth, but generally it does not wait for it to radiate to the surface of the earth, and it gradually disappears in the long road to the distant land. For this reason, solar radiation is mainly light radiation. Due to the presence of the atmosphere, the size of the solar radiation that actually reaches the Earth's surface is affected by many factors. In general, the solar altitude, atmospheric quality, atmospheric transparency, geographic latitude, sunshine duration, and altitude are the main factors affecting the atmosphere.

The photovoltaic system has the following characteristics:

(2) No air pollution or discharge of waste water;

(3) No combustion process, no fuel;

Since the 1990s, it has been a period of rapid development of photovoltaic power generation in China. During this period, Chinaâ€™s PV module production capacity has been increasing year by year, the cost has been continuously reduced, the market has been continuously expanding, and the installed capacity has increased year by year. In 2006, the cumulative installed capacity reached 35MW, accounting for approximately 3% of the worldâ€™s share. Over the past 10 years, the long-term average of Chinaâ€™s photovoltaic industry Maintained a 1% or so share of the global market. By 2020, China's photovoltaic technology industry will continue to improve and develop, the cost will continue to decline, and the photovoltaic market will undergo tremendous changes: It is expected that China's solar cells will be mainly used for independent photovoltaic power generation systems during 2005-2010. The cost will be about 1.20 yuan/kWh by 2010;

As the worldâ€™s energy consumption continues to rise, the environmental pollution caused by the abuse of fossil fuels has become increasingly serious. While mankind is responding to the sustained economic development, it must also pay attention to the issue of ecological balance. The human exploration and research on solar energy utilization will be more active, and it also indicates that solar photovoltaic grid-connected power generation will play an increasingly important role in the future society.

This is about Centrifugal Fan

Centrifugal fan is to rely on the input of mechanical energy, increase gas pressure and send gas machine, it is a kind of driven fluid machinery. Centrifugal fans are widely used in ventilation, exhaust and cooling of factories, mines, tunnels, cooling towers, vehicles, ships and buildings; ventilation and draft in boilers and industrial furnaces; cooling in air conditioning and domestic appliances and Ventilation; grain drying and selection; wind tunnel source and hovercraft inflatable and propulsion.

Centrifugal fan works with turbine compressor basically the same, are due to the gas flow rate is low, little pressure change, generally do not need to consider the gas volume change, that is, the gas as incompressible fluid treatment.

Centrifugal fan from the chassis, spindle, impeller, bearing and motor drive and other components.

Chassis: made of steel sturdy and reliable, can be sub-integral and semi-open, semi-open for easy maintenance. 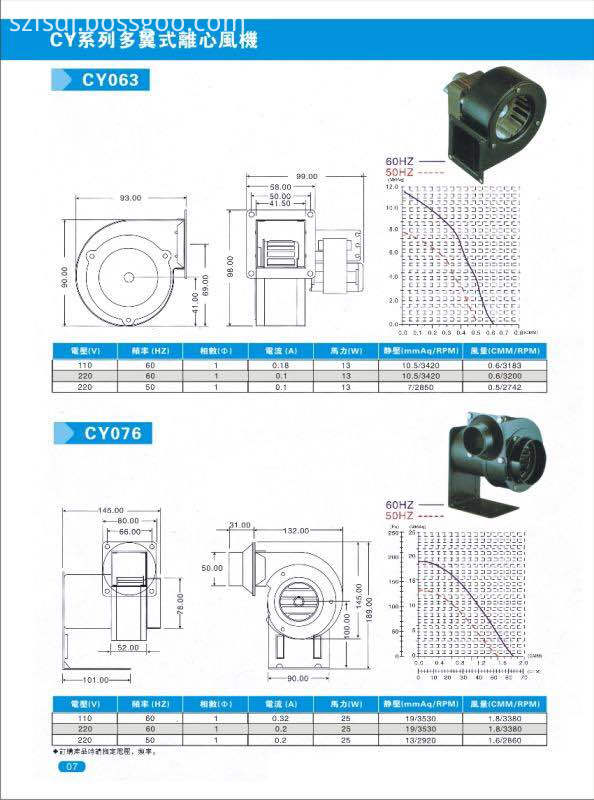 
2. Smooth operation: Optimized design of the impeller to reduce the axial force to a minimum, and efficient impeller, and static and dynamic balance correction, the machine running smoothly, without any damping device in the case of bearings Amplitude â‰¤0.04mm.


3. Low noise: blower operation, without any mechanical friction, the use of a reasonable blade-shaped line to the sound to a minimum. Centrifugal blower noise is high-frequency noise, as long as there are obstacles, can be noise, so the fan room almost no noise.


7. Drive: usually using a two-pole asynchronous motor, you can also use four-pole motor drive. Depending on the user grid, different voltage motors can be used.


8. Sealing: In addition to each level of import impeller impeller, the interstage and the housing at both ends with a labyrinth seal to prevent gas leaks.

if you have any questions,please contact with us directly.AC axial fan are produced by Aluminum Alloy and PBT+30%GF impeller.Welcome visiting our Factory or sending mail directly to inquiry us.