Zhao Haiyang: Continue to increase the layout of hardware channels 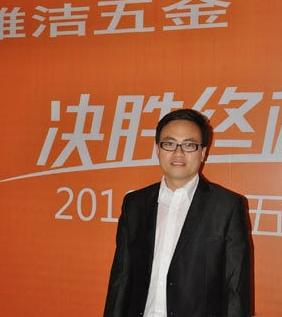 In the domestic real estate market temporarily adjusted by the impact of macro-control, home building materials industry is in a difficult time. Yajie Hardware has gone up all the way, rushed around the country, and frequently attacked. More and more representative projects began to use Yajie hardware products. In response, the reporter interviewed Zhao Haiyang, Yajie Hardware Marketing Minister, hoping to better understand the past, present and future of Yajie Hardware.

[The writer]: Hello Minister Zhao, I would like to provide you with some information background before the interview. 1. In the financial crisis in 2008, the central government invested 4 trillion yuan to stimulate economic recovery. By the end of last year, this work had been basically completed. ; 2. In 2010, China's GDP reached 39 trillion ***, surpassing Japan's 400 billion, achieving a growth rate of 10%; 3. On February 9, 2011, the Central Bank announced a 0.25% rate hike to cope with CPI 6%. The growth; 4. The Ministry of Housing and Construction and the Inland Revenue Department began to collect real estate tax, and the State Council promulgated the â€œNew Country Eightâ€ before the Spring Festival. Some policies have jointly cracked down on second-tier citiesâ€™ real estate speculators. Can you tell us about the overall situation of Yajie Hardware in the context of this year, and what were the new initiatives and plans for 2011?

[Yajie Hardware Zhao Haiyang]: Last year, our greatest pride was in the terminal layout. By the end of last year, we had reached a total of 1,000 franchised stores in the country, achieving the basic coverage of the first and second tier cities. In 2011, the direction of Yajie Hardware's efforts is to continue to expand the terminal layout. The continuous increase in channels is an important way for us to achieve outstanding results. Our goal this year is to add 150 stores. Secondly, there will be breakthroughs in product quality, product lines, and after-sales services. Now the industry is more popular with â€œbig homes,â€ and in the face of the temptations of â€œbig home,â€ Yajie still insists on consistent focus, focusing on products, and focusing on services. In 2011, we will continue to enrich the product line to occupy a larger market share. At the same time, we hope to produce a full set of home improvement hardware products and better service to consumers within this year. In addition, in the face of inflation and the current situation of rising raw materials, Yajie will make efforts to reduce production costs and management costs, so as not to increase product prices, uniform prices across the country, and ensure the interests of consumers.

In 2011, the hardware market is full of many challenges, such as the rising raw materials, the country's efforts to increase macroeconomic control, etc., which will have an impact on the home industry to a certain extent, but the impact will not be too great. Despite some challenges, we are still full of confidence. This year, when we set 2011 marketing goals with regional agents, we are all highly motivated and confident. I believe this is a good harvest year.