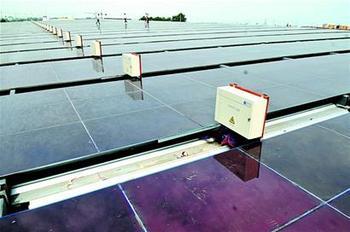 In February of this year, several electric power workers ran to the home of Lin Hairen He Xianjun and talked to him about the pen business - State Grid wants to buy electricity from the 20 solar photovoltaic panels on the roof of his home.

In this way, He Xianjun became the first general citizen in the province to supply power to the national grid.

More than a month later, He Xianjun has sold nearly 500 kWh of electricity. Yesterday, the reporter went to the roof of his home to observe the grassroots new energy "power plant."

There is a small "power plant" on the roof of the 6-story building.

He Xianjun lives in Zhiyan Village, Youxi Town, Linhai City. He usually works in the factory. The photovoltaic panels on the roof are all drummed in his spare time.

From the township government to the west, the reporter quickly found the 6-story building in his house. He took the reporter straight to the top floor and walked excitedly to introduce a power generation system that had just been transformed over a month ago -

The two large slopes on the roof were covered with photovoltaic panels. Counting, a total of 24, each about 1.6 square meters.

He Xianjun said that this was bought by him two years ago. At that time, the price of photovoltaic panels had dropped from five to six thousand to more than one thousand. He bought 24 in one breath and spent a total of more than 30,000.

On the walls of the roof, various instruments are hung with different colors of wires. A huge rectangular motor worked on the side, making a "squeaky" sound. On the motor display, the numbers flashed.

In sunny conditions, nearly 6 degrees per hour can be emitted here. For the He Xianjun family, these powers could not be used up.

Spent 8,000 yuan to buy hardware, please help the power supply bureau to install, you can and the network.

For two years, He Xianjun has been enjoying the "welfare" brought to him by the sun. However, before the transformation of the roof â€œpower plantâ€, there was a problem that has plagued him: there is no place to use electricity, which is a pity.

"In the beginning, it can only be stored in a battery, but the loss is quite large. Less than half of the electric energy is stored, and the battery is also easy to damage." He Xianjun said that a month's power generation is about 500 degrees, he can only use more than 100 degrees.

This means that He Xianjunâ€™s excess electricity at home can be sold to the national grid. After he heard the news, he was very excited and immediately submitted a grid application to the local power supply bureau.

He spent more than 8000 yuan, bought a grid-connected inverter and a set of smart software. According to He Xianjun, the inverter can convert the electricity generated by the photovoltaic panels into AC power, and the software can send the electricity to the grid to his mobile phone.

On February 7 this year, several electric workers installed machines on the roof of He Xianjunâ€™s house, connected the lines, and successfully integrated his home circuit into the national grid. He Xianjun said that these installations and services are free.

Has been provided for 479 kWh, but the current power supply bureau is still "bridging its accounts"

He Xianjun has a new meter at the door of his home. Its appearance is no different from that of an ordinary household meter. It can actually be a new electricity meter with two-way electricity. "I used the electricity grid, how much electricity I sent to the grid, and this table can be calculated clearly."

He calculated that by March 17th, the rooftop solar power system had delivered 479.1 kWh of electricity to the national grid. This is not too much, because there are few sunny days in February. If calculated according to the average value, generating 500 degrees a month is not a problem, and one year should be able to issue more than 6000 degrees of electricity.

He Xianjun is not in a hurry. "To be honest, I don't care about the money. When the National Grid's electricity supplier and creditor feel, it's really good."